The tenth "Unexpected Court" was delivered and Gustavo Kuerten (a.k.a. Guga), patron of the project and three-times champion of Roland Garros, took part of the action.

The tenth “Unexpected Court” was delivered and Gustavo Kuerten (a.k.a. Guga), patron of the project and three-times champion of Roland Garros, took part of the action.  The athlete also drew his traditional heart and gave a tennis lesson.

“Where there used to be a staircase, one of the main entrances to the favela Santa Marta, now there is a basketball court.  What for years used to be only an exit street of the Station 3 of the Plano Inclinado (cable car system), and a passageway to many residents, is today a running track.  In the small square, where there were no toys, now kids can play hockey.  These sports, which were in the spotlight in August, arrived in an unusual way in Santa Marta, located in the south zone of Rio de Janeiro.
Basketball, track & field, hockey, rugby, tennis table, volleyball, golf, long jump and goal ball are now part of the local residents’ routine.  The tenth “Unexpected Court” was opened by tennis player Gustavo Kuerten.  On August 2, Guga reproduced the famous heart he drew on the floor of Roland Garros after winning it for the third time in the new area where now there is a tennis court – and taught some tennis techniques to the children.

Local residents, who are so used to seeing football everywhere, were excited with the arrival of new sports.  José Luiz de Oliveira, a teacher of a football school located in the community, decided to join the project and encourage his students. He now teaches the rules of these other sports too.

Since June, the “Unexpected Courts” have been delivered by Coral’s project “Tudo de Cor”, in partnership with agency NBS and the Department of Sport, Recreation and Youth (Seelje).” 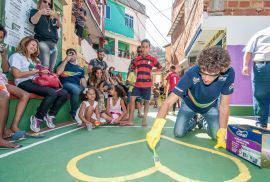 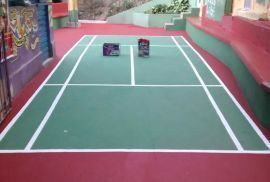 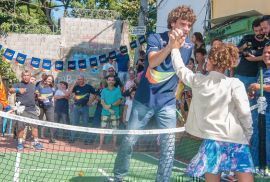