Partnership between the Tintas Coral’s project ‘Tudo de cor para você’, the shop Cofert Tintas, the Sub-prefecture of Joaquim Egidio, Campinas City Hall and CONDEPACC to renovate the historic center of Joaquim Egidio. The patron of the action was Cesar Cielo, professional swimmer and Olympic champion.

The community of the district of Joaquim Egidio, 15 km from Campinas downtown, was awarded with a full renovation of its historic center on November 28th via project ‘Tudo de cor para você’, from Tintas Coral. The patron of the initiative was the swimmer and Olympic champion Cesar Cielo and it was also attended by local authorities.

The project renovated the painting of 32 buildings located in the center of the district, on Heitor Penteado Street, and of which 17 are listed as historical sites by the Conselho de Defesa do Patrimônio Histórico e Cultural do Município de Campinas (Council for the Protection of Historical and Cultural Heritage of the City of Campinas – Condepacc). The reason why the swimmer and Olympic champion Cesar Cielo was invited to be the patron of the action is because his parents were born in the region. The delivery ceremony was marked by a painting taskforce made up of local residents and the sportsman.

Among the buildings renovated by ‘Tudo de cor para você’ are homes, shops and public buildings all located near the district’s central square. To make sure the right colors, according to Condepacc guidelines, were being chosen to paint the historic buildings, architecture students from PUC Campinas carried on a thorough research that included the analysis of the surfaces of the historic buildings by removing several layers of paint until the original colors were found. The paints applied on the surfaces were Coral Decora and Acrílico Total and the colors were those that most approximated the original ones. The color of the year 2016, recently announced by Tintas Coral’s study of color trends ‘Colour Futures’ – “Cherished Gold” – was one of the chosen hues. The enamel Coralit was the product used on the window frames.

Around 1200 liters of paint were used in the entire project.
Tintas Coral’s project ‘Tudo de cor para você’ in the center of the district of Joaquim Egidio counted on the participation of the group Cofert Tintas, Campinas City Hall, Condepacc.

“It’s an honor to be patron of the project ‘Tudo de cor para você’ in Joaquim Egidio because of its historical and cultural importance and specially after leaning that the initiative came from the residents. I have a strong connection with this region, since I was born and raised very close to here,” commented Cielo, Olympic and world champion and world record holder of the fastest swimming race, the 50-meter freestyle.

The initiative to revitalize the historic center of the Campinas’s district came from the community, led by the paint group Cofert Tintas. The idea was well accepted by the local public administration and the partnership with Coral’s ‘Tudo de cor para você’ came right after. “Our project’s mission is to add color to people’s lives, especially in places that have historical significance and relevance to the residents. Joaquim Egidio is certainly one of those places that present all the historical and cultural requirements for the project. In addition, the participation of Cesar Cielo as patron of the initiative was extremely welcome,” explains Marcelo Abreu, institutional marketing manager of Tintas Coral and leader of the project ‘Tudo de cor para você’. 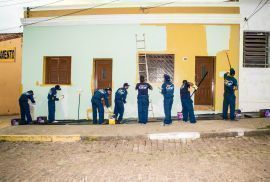 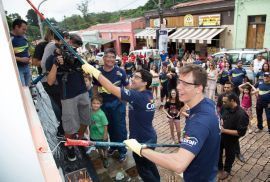 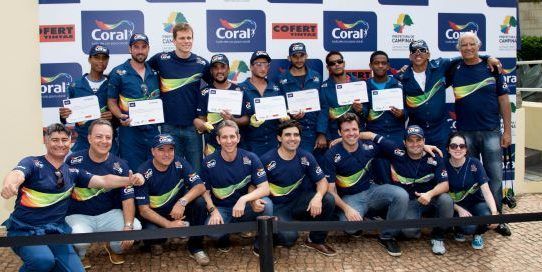