Neymar Jr Institute celebrated its 1st anniversary and was given a painting by the project ‘Tudo de cor para você”, from Tintas Coral.

Neymar Jr Institute celebrated its 1st anniversary and was given a painting by the project ‘Tudo de cor para você”, from Tintas Coral. The art was painted by young apprentices guided by the artist Paulo Consentino and portraits the family of the football star Neymar Jr.

Children and families attended the event that celebrated the 1st anniversary of the Institute Neymar Jr. The event was open to the public and tickets were given in exchange for 2kg of food. During the whole event 10 tons of food were collected.

According to Neymar da Silva Santos, vice president of the Institute and father of the footballer, the event celebrated the work that was carried out during in 2015.

The celebration of the 1st anniversary of the Neymar Jr Institute in Praia Grande, on December 13th, was marked by the delivery of the 187-square-meter mural painted by the santista artist Paulo Consentino. The painting, which was a gift from Tintas Coral’s project ‘Tudo de cor para você’, was placed on the external wall of the institute’s multi-sport gymnasium and portrays the faces of Neymar Jr., his son David Lucca and his sister Rafaella, using only gray shades. The artist was helped by the institute’s students who had attended a stencil workshop promoted by the artist.

The institute is a huge educational and sports facility that serves 2,400 children. It is located in the region where the footballer grew up, in Jardim Glória, city of Praia Grande. The event for its 1st anniversary had a large benefit concert for 5000 guests with shows from Henrique e Diego, Alexandre Pires, Wanessa Camargo, Mc Bola and Banda Malta. In addition to the music performances, there were dance shows from the students and videos that showed all the work done in this first year of the project.

The new large-scale painting is the third work signed by Paulo Consentino on the site. In January this year, he portrayed the faces of Neymar Jr. and the retired gymnast Lais Souza on one of the multi-sport gymnasium’s wall also in partnership with ‘Tudo de cor para você’. Consentino also decorated the institute’s Communication Room with an 18-square-meter painting that reproduces a photograph of the footballer with the FC Barcelona shirt and 11 boys who are served by the institution.

“This third panel is the grand finale of a year’s work in partnership with Neymar Jr Institute and Coral’s ‘Tudo de cor para você’. I am very proud of this partnership since both are examples of projects that make a difference in our country and transform people’s lives,” stated Consentino.

Marcelo Abreu, institutional marketing manager of Tintas Coral and leader of the project ‘Tudo de cor para você’ also celebrated the partnership: “The projects developed together with Neymar Jr Institute and artist Paulo Consentino only reinforces our mission that is to add color to homes and communities throughout Brazil through initiatives that combine art, sports, education and social transformation.” 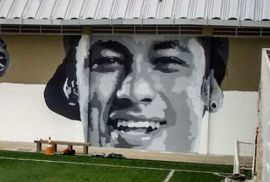 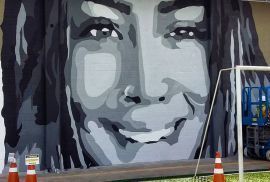 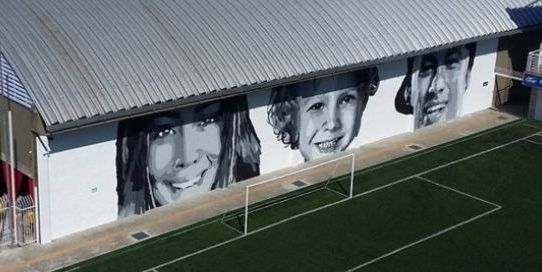