The project 'Cidade que brinca' is an educational platform based on playful activities whose objective is to build circuits, activities and outdoor games and thus make the city more human, walkable, healthy, safer and more joyful for everyone.

The project ‘Cidade que brinca’ is an educational platform based on playful activities whose objective is to build circuits, activities and outdoor games and thus make the city more human, walkable, healthy, safer and more joyful for everyone.  It promotes interventions in the city’s public spaces always focusing on children and fun.  Among these interventions there are playful circuits with games on sidewalks and urban facilities, task forces to paint texts, cartoons and drawing from kids on façades of houses, stickers with the kids’ drawings to be placed on garbage cans, landscaping, etc.

In addition, IDIS – Institute for the Development of Social Investment – was hired to evaluate the project based on the built up indicators and consequently measure the impact of the project in the community.  The goal of the project ‘Cidade que Brinca’ is to make Glicério the first neighborhood redesigned over the children’s perspective and therefore inspire other neighborhoods to do the same.  Ultimately it is intended to be replicated all over São Paulo through a legislative named: Cidade Amiga das Crianças (“Children-Friendly City”).

Glicério is located in a rundown area full of old buildings and historical houses in which children live in extreme social vulnerability and violent environment.  In this first phase of the project, the houses of Lins Street will be painted in lively colors and will redefine the landscape of the region.

The project ‘Cidade que Brinca’, an arm of the main project ‘Criança fala’ (“Child speak”), is run by the NGO Cria Cidade (“Creates City”).  The NGO is quite well structured and counts on heavyweight partners from private initiative, public organizations and leaders of several different sectors.  It also has good relationship with journalists from mainstream media.

The project ‘Let’s Colour’ peers up with ‘Cidade que brinca’ to renew playing areas and add colors to São Paulo’s neighborhood.  On the event that celebrated the delivery of the 1st phase, there were games, activities for children and a rock festival.

Several streets of Glicério, a poor neighborhood in São Paulo’s center, were turned into sceneries named ‘narrativa brincante’ (“playing narrative”).  Coral’s project ‘Let’s Colour’, in partnership with ‘Cidade que brinca’, which is headed by the NGO Cria Cidade, contributed not only by renewing playgrounds, but also by transforming the lives of entire families.

The first circuit of this urban redefinition took place in the streets Sinimbu and Lins, between May 9 and 15.  The themes chosen were ‘characters’ and ‘transportation’ and by adding new colors, a new life was given to the houses of Glicério.  82 volunteers painted 22 buildings, sidewalks, walls, posts, the asphalt and even crosswalks totaling an area of 2,500 square meters.

“It was an amazing experience. Together, we brought color and life to the dreams of the children from Glicério, a region of extreme social vulnerability.  Now the area is more friendly and fun,” says Nayana Brettas, founder of the NGO Cria Cidade. 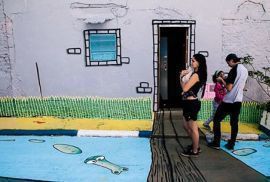 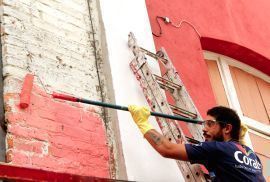 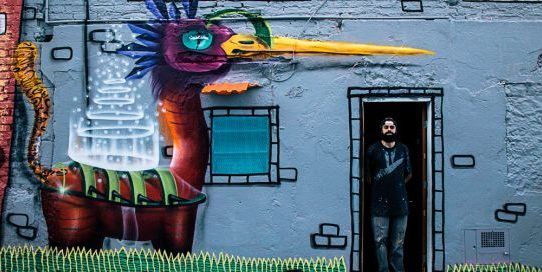