The painting of the façade of the school where the footballer Luis Suarez studied in Montevideo, Uruguay, by artist Paulo Consentino. The painting was named "Escuela No. 171".

The painting of the façade of the school where the footballer Luis Suarez studied in Montevideo, Uruguay, by artist Paulo Consentino. The painting was named “Escuela No. 171”.

The project “Tudo de cor para você” from Tintas Coral – a brand from the multinational AkzoNobel – arrived in Uruguay with the named “Vení al color”. It came to honor the footballer Luis Suarez, who is now part of FC Barcelona’s superstar team of strickers alongside Neymar Jr. and Lionel Messi. Artist Paulo Consentino, who was born in Santos, Brasil, was chosen to design and paint the 19-square meter panel that portraits the player celebrating a goal. The painting will be made on the façade of the primary school “Leonor Hourticou” where Suarez studied in Montevideo.

In Uruguay, the project “Vení al color” is related to the decorative paints brand Inca, also owned by AkzoNobel. In addition to painting the image of the athlete, the project also repainted the entire school.

The idea to honor the Uruguayan striker took shape after AkzoNobel’s project in partnership with the Instituto Projeto Neymar Jr, in Praia Grande, Brasil, in January 2015. The partnership resulted in a painting of Neymar Jr’s face, also signed by Paulo Consentino, on the walls of the Instituto’s multi-sport gymnasium.

The connection between the plastic artist and football was consolidated last year with the paintings of two murals, one at the Training Center Rei Pelé from Santos Football Club and the other at Congonhas Airport in São Paulo, named “Mural of the World Cups”.

“This is another opportunity to point my work towards the sports universe, which inspires me so much. I’m a big fan of these international superstars and the invitation from AkzoNobel allows me to expand my art beyond its limits in Latin America through football”, reports the proud Consentino.

Find out more about Inca in Uruguay here. 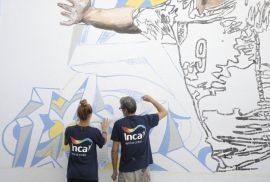 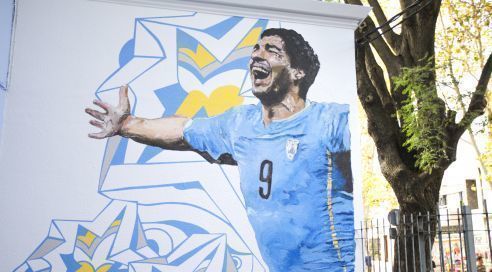 Adding color to the Oncological Hospital of Santa Cruz, Bolivia